I am a physicist working in the domain of experimental high-energy physics, with a focus on gamma-ray instrumentation. I received a PhD in physics from McGill University in 2011. From 2011 to 2014 I was a Kavli postdoctoral fellow at the Kavli Institute of Cosmological Physics at the University of Chicago and a post-doctoral fellow at the McGill Space Institute in 2015 and 2016. I am Research Scientist at the Canadian Hazard Information Service of Natural Resources Canada where I research terrestrial gamma-ray detectors for safety and security applications. I live in Ottawa, Ontario, Canada.

Check out the latest news from the VERITAS project here.

Read a recent NIM article about the SCoTSS instrument.

See my academic CV or view my publications on ADS.

Or drop me a line through my contact page. 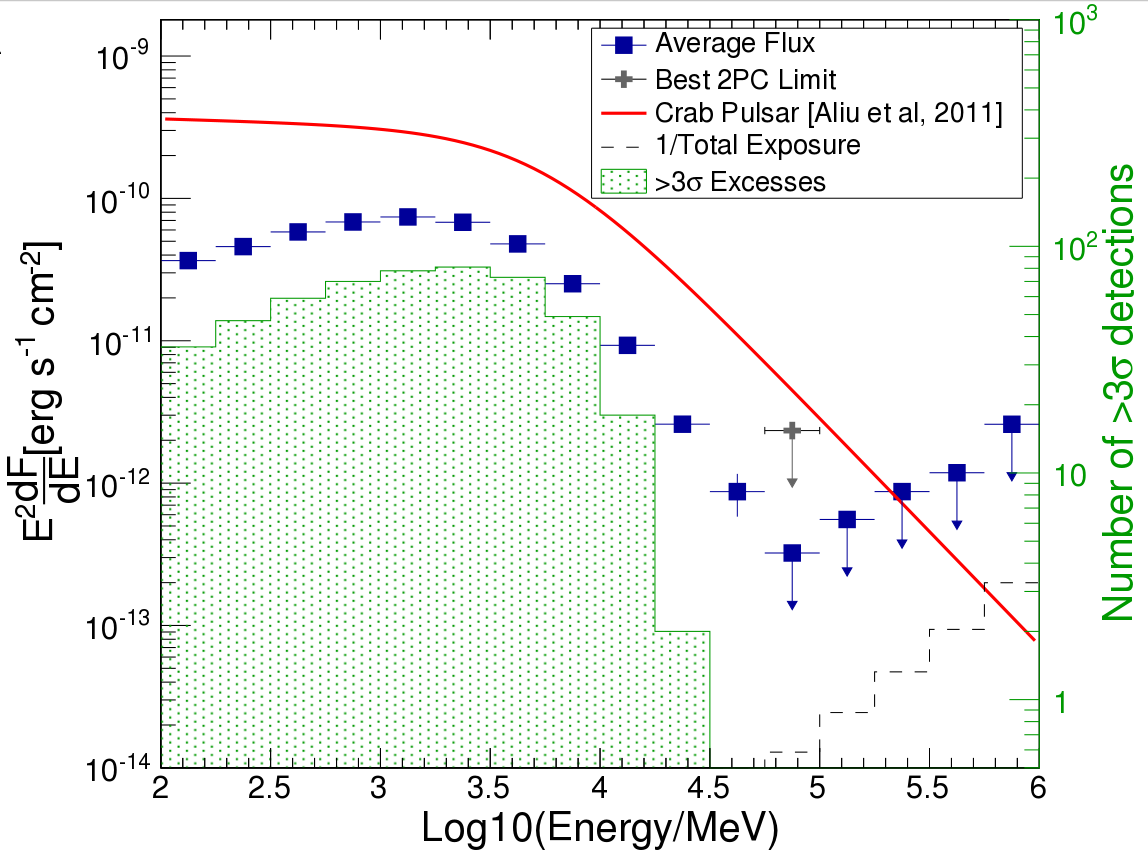 This figure shows the stacked flux of 115 gamma-ray pulsars observed by the Fermi space telescope.

Above 50 GeV there is no indication of an up-turn in the falling spectrum. Read the full article here.

I delivered the 81st Compton Lecture Series in the Spring of 2015. See the lecture material below.

Neutron stars are born in the final moments of the supernova death of massive stars and, in keeping with their exotic origin, they exhibit unmatched extremes in a variety of ways. Not only are they the smallest stars we know of, neutron stars are the most dense solid objects in the known Universe. Their surface gravity is 100 billion times that of the Earth and their magnetic fields strengths, which can reach a quadrillion Gauss, are the strongest known to exist. Neutron stars are born rotating rapidly and their emission, like the beam from a lighthouse, is observed as a highly stable and regular periodic pulsation - hence the name 'pulsating star' or 'pulsar'. Although pulsars were discovered over 40 years ago and the number of known pulsars exceeds 2400, the physical processes which power the vast array of unique and often bizarre phenomena observed from pulsars are poorly understood. Explaining the observed behavior of neutron stars has become one of the most challenging puzzles in high-energy astrophysics. Despite the longstanding mystery of their emission, the steady and predictable pulsations from pulsars make them remarkably powerful astrophysical tools. This duality has put pulsars at the centre of some of the most compelling astrophysical research of the last few decades. Each week we will explore different aspects of this duality, by reviewing pulsar phenomena in different wave bands (radio, optical, x-ray, gamma-ray) and by discussing the role of pulsars in tests of Einstein's theory of relativity and in the search for gravitational waves.